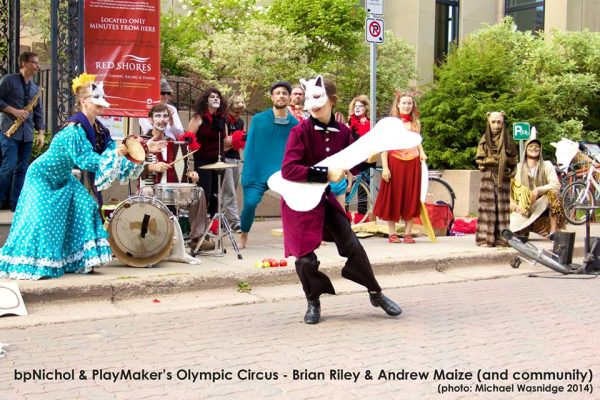 The Circus came back to Charlottetown for Art in the Open 2014!

We celebrated the 150th anniversary of the Slaymaker and Nichols’ Olympic Circus by participating in this ‘convergence of talent and creative vision’ that looked to transform tomorrow by shooting today out of cannon and balancing contorted yesterdays on miniature horses juggling flaming balls of normality, humour and wispy-wafty sanity.

The PlayMaker & bpNichol’s Olympic Circus was a collaborative performance that takes the form of the Circus, but instead of performers coming to town, it is you who creates the magic. This is call for all performers, acts, musicians, builders, make-up artists, lion tamers, puppeteers, equestrian acts, animals, freaks and weirdos.

The Circus of the Normal was in town from August 19th – 23rd preparing for the evening of mind-bending, illuminating performance that happened at Art in the Open August 23rd. Leading up the performance we ran workshops and work parties designed to build puppets, develop performances, characters, masks and costumes. The community came out and created amazing acts for our 3 different performances, with the finale being at the baseball field in the park.

A Bit about Our Form

The format of the circus enables participants to express themselves through a variety of media including but not limited to dance, visual art, musical, theatre, comedy, etc. This is not your typical Circus; performances vary from traditional circus acts such as juggling and stilts, to minimalist performance art, large scale puppetry, political and satirical acts that play with the circus theme, masks and lots of cardboard!