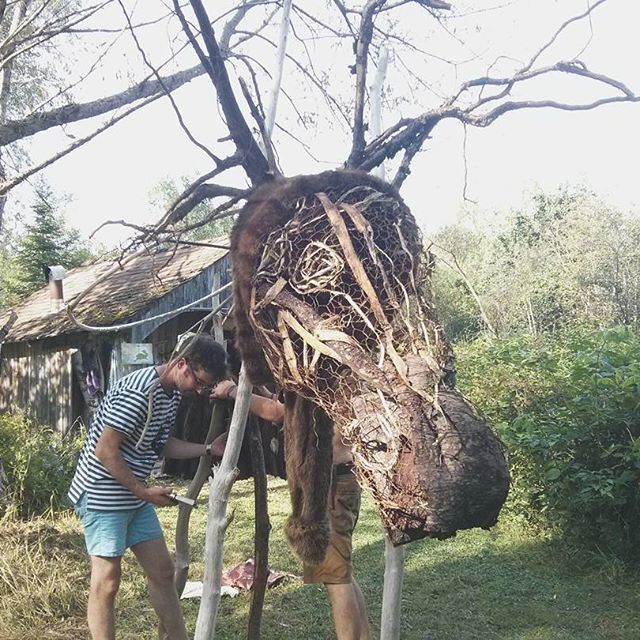 The ‘Moose Rising’ project was born during a week long residency. White Rabbit “metamorphosis” project was a new incarnation of the White Rabbit Residency with a focus on collaborative relationships between musicians and visual artists. I went into the residency with an interest in pulleys, and vision of a hanging sculpture high up in the trees. I had pictured building a moose(based on an illustration in a children’s book I had been reading my son) and it proved to be a good starting point for a sculpture that could come alive in a small performance during the festival. I chose the pond as my site. It had trees surrounding it that would be perfect for rigging up the ropes and pulleys. It was decided that dusk would be the ideal time for the performance, and some lighting would be necessary. I designed a floating fire pit that could be pulled out under the moose after it had risen from the pond. Casey Meijer was in charge of raising the puppet, and another friend slowly pulled a string (that was strung across the pond) that brought the fire out to the centre of the pond.) I was working with musician Al Melnyk to create a live sound track of moose groans. Al’s synthesizer was the perfect compliment to the found object instruments I had sourced from the farm. Big thanks to Grey Muldoon for assistance with the moose sculpture.